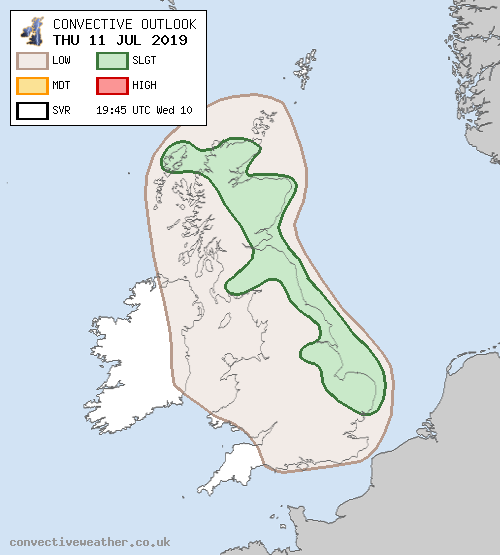 A broad west/northwesterly flow covers the British Isles on Thursday, with an upper low located near the Hebrides. Relatively cool air aloft will overspread a broad and notably moist warm sector, with surface dewpoints of 14-17C expected widely. Assuming sufficient cloud breaks allow reasonable surface heating of this airmass, then up to 1,000 J/kg CAPE is possible across central / eastern / northern Britain.

A mid/upper-level dry intrusion will spread gradually eastwards during the day, the leading edge combined with areas of low-level convergence and orographic forcing providing the focus for scattered showers and a few thunderstorms - initially over the high ground of Scotland from noon onwards, but also over areas gradually farther south as the afternoon / evening progresses.
Across Scotland, weak shear will result in slow-moving "pulse type" convection, leading to the risk of surface water flooding - here though a greater chance of a few funnel clouds will exist. The environment farther south, particularly over E Midlands / East Anglia, will benefit from marginally better shear but some uncertainty exists over the potential for a couple of capping inversions, which may serve to inhibit cloud depth somewhat. If a few scattered thunderstorms can develop here, more likely during the evening hours, then hail up to 1.5cm in diameter would be possible.
Showers/storms will slowly fade during Thursday evening, but could persist over parts of East Anglia until the early hours of Friday given only a slow cooling of the boundary layer.
NOTE: we have issued a SLGT, which suggests a 30-45% chance of lightning within a 25 mile radius of a given point. There will undoubtedly be many areas within the SLGT that remain void of lightning.