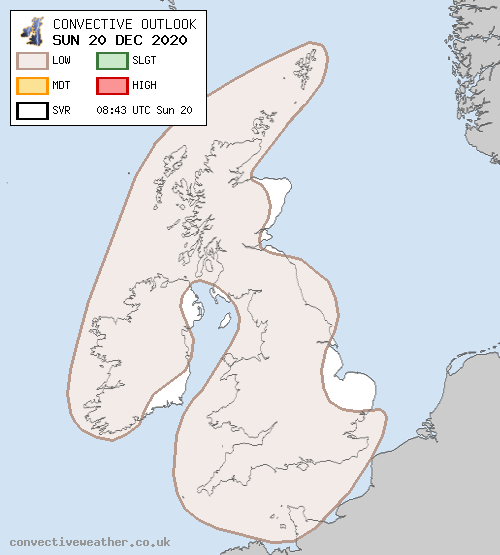 Cold pool initially across the British Isles, with steep mid-level lapse rates and several hundred J/kg CAPE, will clear gradually to the northeast on Sunday as an upper ridge temporarily builds from the Atlantic. However, some instability will be maintained near western Scotland on the forward side of the next approaching upper trough. As was the case on Saturday, numerous showers will develop over open waters and move inland into southern and western coastal counties, but some making good progress well-inland due to steering winds and occasional shortwave troughs swinging through in the flow. The greatest risk of lightning is primarily over seas and adjacent coasts where showers move onshore, although the overall risk is considered below SLGT threshold (15-20% chance), and generally reducing through the afternoon. Nonetheless, hail and gusty winds are likely in several showers, although this risk will reduce through the afternoon. By the overnight period the main focus, albeit rather low, will be western Scotland.