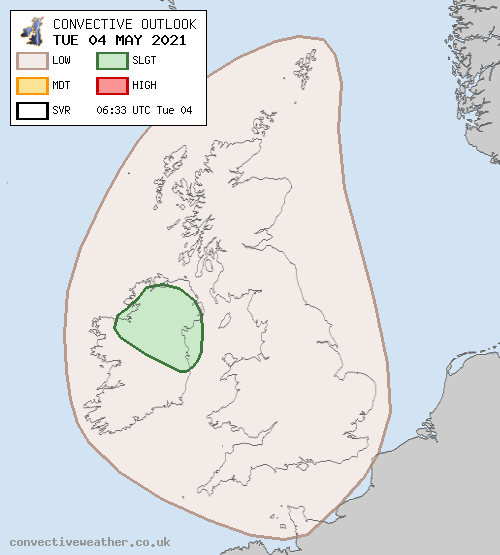 An upper low will cross the North Sea to Denmark on Tuesday, but the northerly flow in its wake will advect a notably cold airmass southwards and curving eastwards across the UK and Ireland. A strip of shear vorticity will straddle a zone from Ireland - Wales - northern Home Counties on the northern flank of a strong mid-level jet. As the cold mid/upper-level air feeds southeastwards through the day, mid-level lapse rates will steepen significantly and when combined with diurnal heating inland will yield 300-500 J/kg CAPE - most pronounced across Ireland. As a result, numerous showers will develop quite widely through the day, becoming organised into more distinct curved bands where low-level confluence becomes maximised. Guidance continues to suggest a more organised area of rain could evolve from SW Scotland - NW England - N Midlands - N East Anglia.

Realistically, given the thermodynamic and kinematic environment, a few isolated lightning strikes could occur just about anywhere - hence the large, broad LOW threat level. Clearly there is a zone where a favourable overlap of most ingredients exists - namely from Ireland through Wales / Midlands towards London/Essex but confidence in coverage of lightning is not high enough to introduce a SLGT (away from Ireland where conditions overall are slightly more favourable for sporadic lightning). Copious amounts of hail is likely in many of the showers, enough to cover roads locally causing some temporary difficult driving conditions, and squally winds of 50-60mph will be possible too. Showers will persist well into the night in some areas, feeding inland on the brisk north/northwesterly steering flow - with the greatest risk of lightning probably over the Irish Sea close to NW England / N + W Wales.