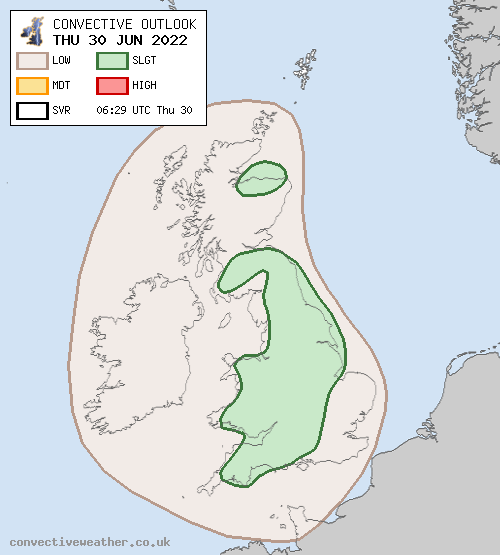 Within the longwave upper trough over the British Isles on Thursday, an upper low will lift gradually from near the Brest peninsula at 06z Thursday to the Humber by 06z Friday. Diurnal heating will lead to increasing instability across the British Isles, and as such numerous showers are likely to develop once again, especially in areas aided by orography and low-level convergence. The deepest convection will be in the vicinity of the aforementioned upper low, where colder air aloft will also yield more substantial CAPE in the order of 400-700 J/kg. Therefore, Wales, SW England, Cen S Eng and the S Midlands would be most favoured for the deepest convection, while areas further north convection will tend to be somewhat shallower in depth. That said, even here a few isolated lightning strikes will still be possible. A couple of issues cause concern for the areas with the deepest convective potential - notably weak shear, and rather moist profiles, both of which may serve to limit cell longevity/intensity. This casts some uncertainty over how much lightning activity may occur, as showers/storms will tend to pulse and then morph into areas of showery rain, especially towards the evening hours. Strong south/southeasterly flow aloft across eastern England would enable any cells here to become organised, however profiles suggest capping may prevent convection from growing tall enough to utilise the stronger flow aloft. A few funnel clouds may occur as a result of low-level vorticity stretching, but flash flooding will be the primary hazard due to slow-moving heavy downpours.

Showers will persist well into the night due to the continued forcing aloft in the vicinity of the upper low over England, and there could be an uptick in activity across E/NE England and adjacent portions of the North Sea during the night - and as such the low-end SLGT has been extended eastwards to cater for this risk. A few heavy showers may also run along the south coast for a time late evening.